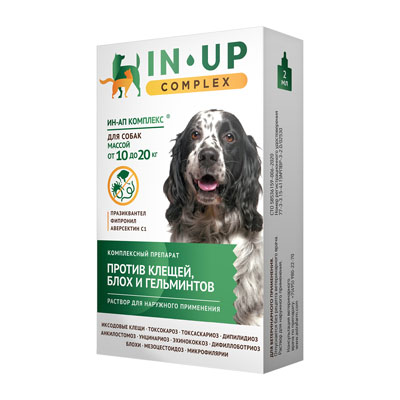 IN-UP complex is a therapeutic and prophylactic antiparasitic agent that possesses a complex insectoacaricidal and anthelmintic activity against larval and sexually mature development phases of ectoparasites (fleas, ixodid ticks, lice, chewing lice) and endoparasites (round- and tapeworms) parasitizing in dogs. IN-UP complex is available in the form of a solution for external use.

2-ml polymer dropper vials with a tamper evident cap. Dropper vials are packed in cardboard boxes and provided with instructions for use. 1 show box contains 5 vials.

IN-UP complex should not be used in puppies younger than 2 months of age, pregnant and nursing female dogs, animals with infectious diseases and recovering animals, as well as simultaneously with other antiparasitic drugs.

It is not recommended to use the drug in Collies, Shelties, and Bobtail breeds due to their increased sensitivity to avermectins.

IN-UP complex is used once by applying on a dry undamaged skin. After moving aside the hair, apply the drug on the skin at several points in the back between the shoulder blades (in places inaccessible for licking).

For complex destruction of fleas, ixodid ticks, chewing lice, round- (including microfilariae) and tapeworms, animals weighing 10-20 kg are treated once at the dose of 2.0 ml.