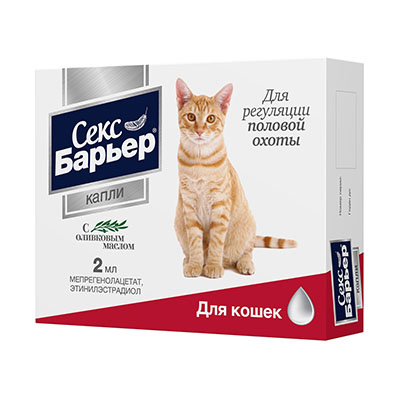 SEX BARRIER is a modern bihormonal drug that solves the entire range of problems associated with estrus and prevention of unwanted pregnancy in female cats.

Drugs trademark of the SEX BARRIER are profitable to sell

Selling of SEX BARRIER products will ensure that your company receives a higher profit as compared to the competitive brands due to a higher margin from each package and a high turnover of the product.

Organizations that sell SEX BARRIER drugs do not spend money on promoting this brand due to its reputation (it has been present on the market for 20 years) and popularity (it can be found in 95-100% of retail outlets).

Drugs of the SEX BARRIER brand are in demand in retail outlets in all formats (premium, medium, economy class).

The drug is prescribed to female cats in order to depress sexual excitement and to interrupt the unwanted pregnancy.

The drug belongs to the modern generation of bihormonal contraceptives. The concentration of hormones in the drug is reduced by 50 times as compared to analogues.

Drops for oral use.

Store in the manufacturer's packaging in a dry place, protected from direct sunlight and light, at a temperature from 0 to +25 °C.

Drops are the most convenient form of the SEX BARRIER drug to be used in female cats.

The active components of the drug – mepregenol acetate and ethinylestradiol, by interacting with the hypothalamic-pituitary system of the animal's body, prevent the maturation of ovarian follicles and terminate the estrus. In case of unwanted mating, the components of the drug actively prevent fertilization of the egg, thereby preventing an accidental pregnancy.

Sex BARRIER drops gently and reversibly affect the hormonal system of the male cats: in 2-3 months after the drug termination, the reproductive function of the animal's body is fully restored. According to the degree of influence on the animal's body, the drug is classified as a low-risk (harmless) substance.

In order to reduce sexual activity and to eliminate aggressive behavior in female cats, it is recommended to administer the drug daily for 3-5 days during the first signs of estrus. Depending on the animal’s body weight the daily dose of the drug is as follows:

SEX BARRIER is recommended for maintaining a calming effect in female cats. In order to ensure a low level of sexual activity of the animal, the drug is given to the female cat during sexual rest (anestrus) at a dose of 4 drops once a day, regularly every 2 weeks.

The medicinal drug was developed and patented by LLC Research and Production Company SKiFF in 1999 under the supervision of leading experts of the Russian Academy of Sciences in Moscow. The SEX BARRIER trademark has been awarded Platinum and Gold Quality Marks of the State Standard of the Russian Federation.

Download the presentation. Find out the secret of successful sales trademark products of the SEX BARRIER