Supramil for dogs weighing from 20 to 50 kg 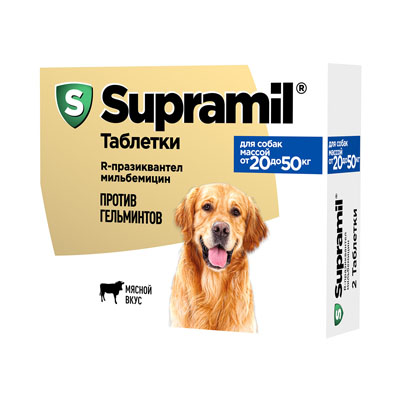 Supramil is a new Russian broad-spectrum anthelmintic drug with an improved composition for dogs. Supramil acts as safe as possible on the animal organism.

It is prescribed for the treatment and prevention of:

Drugs trademark of the Supramil are profitable to sell

Supramil handles pet owner problems with ease. This makes it easy to sell the drug and quickly generate profits.

By selling a product in demand, you improve relationships with customers and make them permanent.

For deworming dogs weighing from 20 to 50 kg.

The medicinal product is produced packaged in 2 tablets in a blister, which is placed individually in a cardboard box with instructions for use and stickers in the veterinary passport.

Store Supramil tablets in the manufacturer's closed packaging, protected from light, separate from food and feed, at a temperature not exceeding 25C.

Contraindications to the use of Supramil tablets are the increased individual sensitivity of the animal to the components of the drug, including a history, severe renal and liver dysfunction.

Emaciated animals sick with infectious diseases, dogs weighing less than 0.5 kg, puppies under 2 weeks old are not subject to deworming.

Deworming of dogs of the collie, bobtail, sheltie (and mestizo) breed, due to the increased sensitivity of these breeds to macrocyclic lactones, is recommended, if necessary, under the supervision of a veterinarian.

The mechanism of action of milbemycin is due to an increase in the permeability of cell membranes for chloride ions (Cl-), which leads to overpolarization of the membranes of nerve and muscle tissue cells, paralysis and death of sensitive nematodes. The maximum plasma concentration of milbemycin oxime in dogs is reached within 2-4 hours; bioavailability is about 80%. The compound is excreted from the body mainly unchanged.

The mechanism of action of R-praziquantel is based on inducing the decay of the tegument, persistent depolarization of helminth muscle cells, disruption of energy metabolism, which causes paralysis and death of cestodes, and promotes their excretion from the gastrointestinal tract. R-praziquantel is rapidly absorbed in the gastrointestinal tract, reaching its maximum concentration in the blood plasma after 1-3 hours, reversibly binds to serum proteins (70-80%), partially metabolized in the liver, re-excreted into the intestine, excreted from the body mainly with urine (up to 80%) within 24 hours.

Supramil tablets, according to the degree of impact on the body, are classified as low-hazard substances (hazard class 4 according to GOST 12.1.007); in recommended doses does not have a sensitizing, embryotoxic and teratogenic effect.

The drug is toxic to bees, as well as fish and other aquatic organisms.

Supramil tablets are prescribed for adult dogs with therapeutic and prophylactic purposes for intestinal nematodes, cestodes and mixed infestations.

Deworming of pregnant and lactating females is recommended to be carried out under the supervision of a veterinarian.

Supramil tablets are administered to animals orally, once, in the morning feeding with a small amount of food or injected forcibly onto the root of the tongue after feeding at a minimum therapeutic dose (per 1 kg of animal weight): adult dogs and puppies - 2.5 mg of R-praziquantel and 0, 5 mg milbemycin oxime.

Doses of the drug depend on the body weight of the dog:

Dogs are given the drug once every 3 months. And also 10 days before vaccination and mating.

Download the presentation. Find out the secret of successful sales trademark products of the Supramil